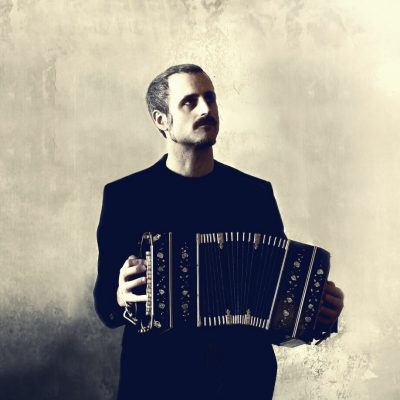 Bandoneon player and composer Omar Massa was born in Buenos Aires in 1981 and has been based in Europe since 2016. Internationally acclaimed as one of the leading artists on the bandoneon and Tango Nuevo, he is a creative musician who desires to share the beauty of his unique instrument and the music of his native city.

Praised in Argentina as “one of the most brilliant bandoneonists of recent years” (Diario de Cuyo, Argentina) Omar debuted at the age of 6 years old playing Piazzolla´s music at Cafe Tortoni, a famous traditional tango house in Buenos Aires and subsequently began studying music at the National Conservatory of Argentina at the age of 12. After being nominated to the most important award in the recording industry in Argentina for his CD “Tribute to Piazzolla”, the family of Astor Piazzolla invited him to play Piazzolla´s bandoneon 25 years after his death – Massa being the only musician allowed to do that.

Omar played for many years at the various tango houses in Buenos Aires and strove to take the bandoneon into the concert halls to play works from the academic repertoire. In 2011, the Government of Buenos Aires invited him to join Placido Domingo and the Buenos Aires Philharmonic before an audience of 120,000 people, in an acclaimed public concert. This was a turning point for Massa´s career after Domingo encouraged him to go deeply on that path of academic music on the bandoneon. In the following years, he became a pioneer presenting a unique repertoire of baroque concertos, symphonic tango and his own compositions as soloist with orchestras like the Asturias Symphony Orchestra, the Berlin Symphony Orchestra, the Romanian National Radio Orchestra, the Moldova Philharmonic Orchestra, the Biel Symphony Orchestra and the Brasov Philharmonic among many others in America and throughout Europe. He performed in several important venues such as the Lincoln Center for the Performing Arts (New York), the National Concert Hall (Dublin), the Colon Theatre (Buenos Aires), the Palace of Fine Arts (Mexico DF), the George Enescu Festival (Bucharest), the Berlin Philharmonic (Germany) and participated in projects with internationally renowned artists such as Eugene Kohn (Conductor of Maria Callas, Luciano Pavarotti), Bruno Delepelaire (1st Cello soloist, Berlin Philharmonic), Tomasz Tomaszewski (Concertmaster, Deutsche Opera Berlin), Máté Szücs (1st Viola soloist, Berlin Philharmonic) and Janne Saksala (1st Double Bass soloist, Berlin Philharmonic).